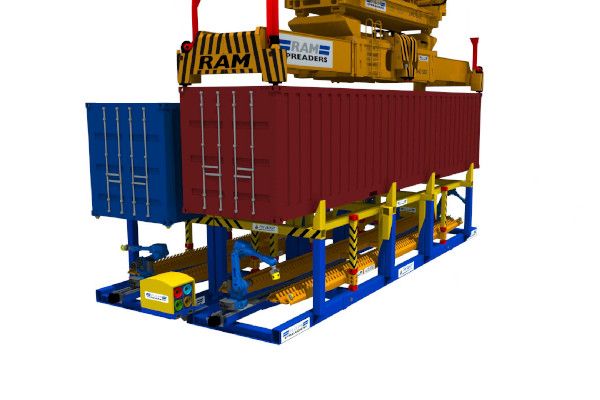 The pace of ports adopting automation is accelerating, giving operators the view of human-related accidents falling, costs declining, and productivity surging. But how can automation fit into your container handling operations? This article considers how twistlock automation can work alongside the trend of tandem lifting to improve STS quayside operations.

How are ports increasing containers moved per cycle?

Container terminals are now accommodating larger vessels, which has led to an increase in pressure for more containers to be handled in short margins. In most cases, this would mean your equipment would have to work harder and faster, but with tandem lifting, your operations will have half the moves in half the time, allowing container productivity to surge! With fewer moves, STS cranes will demand less energy, reduce operational costs and improve sustainability.

RAM has over 120 SingFlex tandem headblocks in operation and more on order. Its popularity, when compared to other tandem headblocks, comes down to three distinguishing features: its low height to accommodate large Panamax vessels; its automated docking station to allow transition between single and twin spreaders without manual intervention and its robust design to reduce maintenance.

RAM Spreaders has also brought out their second-generation twin lift STS spreader which can partner with the SingFlex tandem headblock. The second-generation STS spreader incorporates a whole new approach in spreader design, with multiple engineering and manufacturing technologies, cleverly balancing an increase in structural strength where needed, and reducing the number of components with a new telescopic and twin lift design.  This spreader will appeal to a wider audience due to its ability to use less energy, require less maintenance and perform successfully with tandem headblock.

With STS cranes having the ability to handle more containers per cycle due to tandem lifting, this will undoubtedly boost productivity, but it could lead to a build-up of container congestion. Congestion could have a knock-on effect on your operations: demurrage or detention charges occur, loss of customers, etc. Part of the container handling process is the removal/replacement of ISO container twistlocks – which can add up to 30-60 seconds per lift cycle. RAM’s automated twistlock handling machine, PinSmart, could be the solution to alleviate that pressure on terminals and avoid container congestion.

In previous articles, we have discussed PinSmart’s ability to remove and replace ISO container twistlocks fast and efficiently, whilst removing the element of danger at the quayside. But what hasn’t been mentioned in the customer’s option for a double cradle, which would allow 2x40ft/45ft or 4x20ft ISO containers to be handled each cycle, matching a tandem operation. Along with the two-cradle option, RAM Spreaders provide 2 robotic arms for each cradle and the option to upgrade to more robotic arms.

The outcome of a tandem operation

Integrating PinSmart II would be no easy process, but once it’s in place, the machine has the potential to help terminals achieve a new standard – moving 40 boxes per hour. This will help avoid container congestion, demurrage, or detention charges and instead, increase revenue due to more containers being handled and costs being lower.

PinSmart II automates the removal and replacement of twistlocks. Its design not only reduces the dangers of working under containers to remove or replace twistlocks, but also improves crane cycle times.

Want an outsider's perspective on the different tandem headblock's?