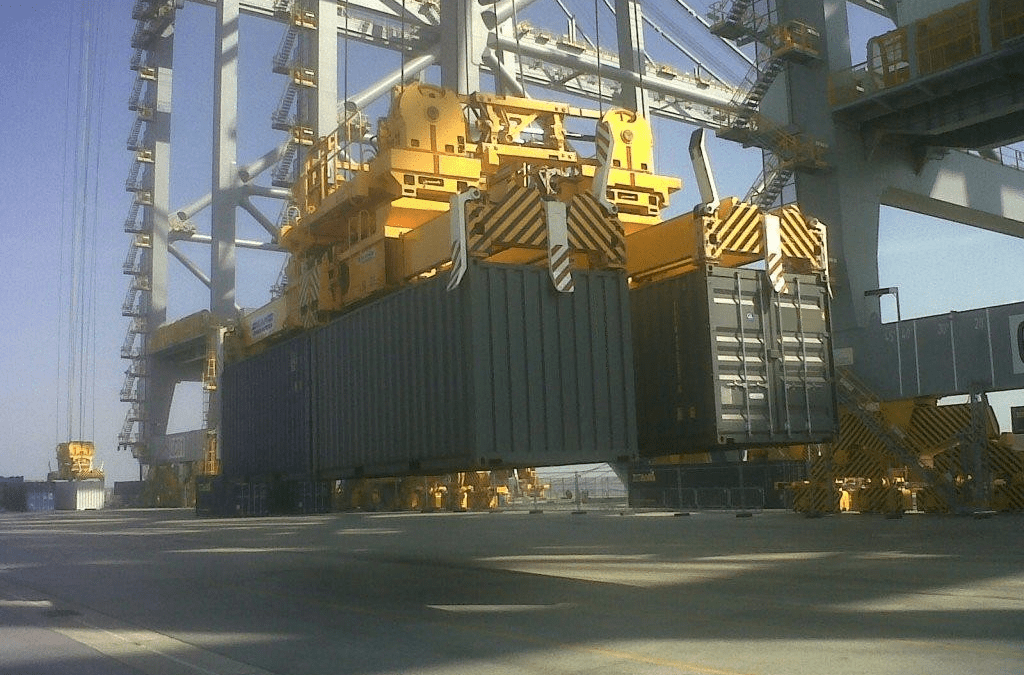 RAM SingFlex head block has been installed on the terminal’s new single hoist ship to shore cranes increasing vessel productivity and ensuring that world class handling rates are achieved. The headblocks have been in operation since the terminal opened in November 2013.

“We are very happy with the product and its performance. We are the only terminal in the UK able to do tandem operation and with this product we will able to deliver world class productivity. We have worked well with the team at RAM. They have been very responsive in optimising this new product and making operations work efficiently” Andrew Bowen, Engineering Director, London Gateway

A new order for the second phase of the terminal has been placed with RAM for a further 4 SingFlex and 9 STS spreaders. The repeat order is a show of faith in a reliable product.

“This repeat order is evidence that SingFlex works well. It will bring the number of units in use globally to 30 and making RAM the only OEM with large numbers of reliably operating single hoist tandem systems” Philip Lee, CEO RAM Spreaders

What is ‘SingFlex’? SingFlex is a tandem headblock system which has been designed for use with conventional single hoist cranes. It offers the terminal operator tandem lift capability without the need for expensive dual trolley cranes. Each SingFlex headblock system is fitted with two RAM separating twinlift spreaders, providing the terminal operator with the flexibility of handling single 20ft, 30ft, 40ft and 45ft containers in the conventional singlelift manner. Alternatively, the operator can handle 2x40ft containers, 2x45ft containers or 4x20ft containers in tandem mode.

“The SingFlex allows terminal operators to work at high productivity in tandem up to 60 containers per hour. The fast change over from Single to Tandem means you can deploy it where there are the most containers on the ship.” Philip Lee, CEO RAM Spreaders

The SingFlex headblock features RAM’s patented auto-connector which allows the crane operator to switch between single spreader mode and tandem spreader mode in a fully automated manner and without assistance from support staff. The automated change over from single to tandem mode, and vice versa, is performed by the crane operator and is achieved in less than 2 minutes. The rapid change over facility allows the operator to select the mode most suitable for the work schedule ahead, maximising productivity at every opportunity by deploying tandem spreader mode whilst minimising any external disruptions to operations.

The crane operator has the ability to adjust the gap, skew angle, full gap adjustment, offset capability and longitudinal offset between the spreaders and containers.

After more than ten years of development with units operating in China, Singapore and North Africa, SingFlex saw its first commercial operation on 8 cranes at London Gateway and was recently followed by 19 automated cranes at DP World’s flagship Jebel Ali Terminal 3.

Bigger Faster Cranes equals Bigger Ships To attract the biggest ships, terminals must be able to provide a fast turnaround to get the vessel back to sea quickly. In the case of London Gateway, using SingFlex makes them the only container terminal in the UK with a capability to lift two 40ft containers or four 20ft containers at once. This results in faster operations attracting bigger ships and more business to the port.

SingFlex allows terminals to work tandem operations for less than 3% of the cost of a ship to shore crane. That coupled with the fast change over from single to tandem means that terminals can get all the benefits of Tandem 40 handling, for a much lower cost.

“This new SingFlex product is key to the high productivity being achieved at London Gateway. The confidence we have in this product is why we have ordered more for our new Berth 3 quay cranes. London Gateway will continue to lead the way in new and more efficient technology.” Andrew Bowen, Engineering Director, London Gateway