A Brief History of the Spreader Pioneer

The man and pioneer behind the name 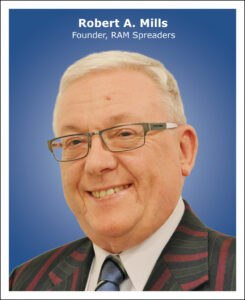 In the early 1970’s Liverpool UK, Robert A. Mills, back then a young steel fabricator and welding engineer was called upon to carry out repairs and improvements to container equipment belonging to shipping lines and stevedores at the Port of Liverpool.  In a brave move and with a wealth of ingenuity, Robert set upon making his first container lifting spreader and the rest as they say, is history.

After joining the family engineering business from leaving school, Robert had the foresight during the early 1970’s to diversify the business into manufacturing container handling equipment.  From a lot of hard work, determination and foresight, Robert has over the years managed to build a globally competitive and an easily recognised brand within the container handling industry.

Now over four decades on, Robert can look back with great pride on his achievements, innovations and how much he and his company have contributed towards the container handling industry.

Born in Crosby and brought up in Waterloo, both suburbs of Liverpool UK, Robert’s family home overlooking the River Mersey was to form an influential part of his childhood, seeing shipping that frequented the Port of Liverpool.

During the 1960’s Robert was often visiting the Liverpool docks with his father and had the opportunity of going on board all kinds of ships, from tugs to ocean going passenger liners owned by companies such as Cunard and Canadian Pacific.

The witnessing of the containerisation of cargo
Robert witnessed the start of containerisation and the first container ships visiting Liverpool and recalls a captain of the Ellerman Line was a lifelong friend of his father.  The Ellerman Line were a major British shipping company at the time, and one of the first to utilise containers and container ships on their services to Iberia and the Mediterranean.  Robert often saw and visited their ships.  Robert reflected and recalled “it was the connection with the Ellerman Line that started the business link with containers and spreaders”.

Robert quickly excelled and establishing himself as a well sought-after steel fabricator and welding engineer in and around Liverpool, with a constant flow of work coming in which was built on both his own reputation, that of his father and the family business.

The family business of Ed Mills & Son, which had existed since 1876 was, as Robert recalls, “a major influence and a natural development for me to join the business after leaving school, as I had always been very close to my father”.  Robert became the fourth generation to join the family business, and back in 2016 was a very important milestone as it is the 140th anniversary of the establishment of the family business.

Mobile Workshop Container Repair Business
Due to his specialised welding knowledge of aluminium Robert was often on board ships repairing aluminium lifeboats and even welding the hull of a Royal Navy minesweeper. His specialised welding covered many different types of materials from steel, through cast iron, copper, stainless steel and aluminium.     From 1967 the first containers started to arrive in Liverpool often on-board general cargo ships.  This resulted in Robert building a mobile workshop fully equipped for all types of welding and other processes required for on-site repairs to containers and other specialised work. The vehicle even contained an electric oven, kettle and most importantly a two way VHF radio for keeping in contact when on site.   Robert explains “The shipping lines found that the cost of repairs carried out by their normal ship repair companies to be expensive due to the restrictive practices carried out in the shipping industry at that time.  They wanted a competitive and fast service, which Ed Mills & Sons provided.”

Due to the fact the business had mobile welding equipment and a reputation from an already well established company, Robert continued to build up good relationships with customers and by “word of mouth” for quality and trustworthiness, the company was asked to carry out repairs to the containers when they were damaged. The repairs were carried out on the docks or in transport depots that stored the containers.

In the early 1970’s, as a result of from the growth of freight container repairs, Robert’s father created a new dedicated company called Speke Container Repairers Ltd on Speke Road in Liverpool adjoining the then, Speke Freight Terminal that belonged to their main shipping customer, Ellerman Lines.  This allowed Ed Mills & Son to concentrate on its core historic business and the building of container spreaders.  Robert recalls “This new business enabled a fully comprehensive service to be offered, both for the repair of containers through to the complete refurbishment of containers as a fully equipped shot-blast and paint facility was set up at the factory”.

During this period, as Robert’s father who was sole proprietor was approaching retirement himself, more responsibility for the day-to-day running of business was on Robert’s shoulders. This meant that the hands-on work of welding and steel construction, originally undertaken by Robert grew less and less.

The very first RAM spreader
In 1972, with Robert’s knowledge and his experience enabled him to build his first container spreader.  This was due to his understanding of the weaknesses in the designs of equipment he had repaired since 1967.  In 1972 a 40ft semi-automatic spreader was urgently required by a customer in Belfast, Ireland, who operated short sea shipping services across the Irish Sea.  The normal supplier wanted 8 to 12 weeks to produce the spreader, but the customer required it in two weeks.  Robert took up the challenge and the new spreader was delivered to the customer in two weeks.

From the building of his first spreader, Robert comments “The whole business of making spreaders was one of gradual development from making the first model in 1972. The knowledge for the first spreader resulted from the repair work carried out over the previous five years, and how I could see the designs could be radically improved, to help reduce damage and improve reliability.”

“Over the following ten years, the spreaders manufactured were all derivatives of the first unit, with the design adapted to match the customer’s requirements.  For example, by 1975 the spreader design had been adapted, so that the spreaders could be carried by heavy duty fork lift trucks. These versions gradually were improved by the inclusion of hydraulics and electrical systems.   Only in 1982 was the major step of building telescopic spreaders considered.  This was due to a conversation with a senior manager in the Port of Felixstowe who stated “why can’t I buy a good, reliable British built telescopic spreader for a QC crane”.

The Spreader Business Expansion
The business Ed Mills & Son was going from strength to strength and in 1982, relocated to a factory building located in Speke, Liverpool close to the airport. This also enabled Robert to refurbish complete container cranes. By 1985 Robert began building the first of a family of telescopic spreaders suitable for all applications resulting in 1986, the building of his first telescopic spreader for a QC crane – in answer to the wish from the Port of Felixstowe!  During this period Robert began using the brand name of RAM Spreaders which was taken from the initials of his name.

Further Expansion in 1992 creates bigger global opportunities
In 1990, due to the growth in the number of telescopic spreaders being manufactured, the company took advantage of a DTI scheme (Department of Trade and Industry) for a stand at the SingaPort 90 Exhibition in Singapore. Robert attended the Exhibition, and during the visit met a representative of NatSteel Engineering Pte Ltd, and so began the relationship that would, two years later, result in a new joint venture and the creation of NatSteel Engineering (UK) Ltd and with it, the new spreader department in Singapore and the UK business moved to Skelmersdale in Lancashire UK, which was ideally located to the motorway networks.

In 1995 the company moved into a purpose built factory in Skelmersdale that was designed as a final assembly and test facility for the spreader structures. In the factory the main structural components would be shipped in ready for final assembly. This method of manufacture continued until around 1999 when it became apparent that the lower manufacturing costs in Singapore had to be used and as such general manufacture in the UK ceased. Thereafter, only special or prototype spreaders were manufactured in the UK until that work was also transferred to Singapore.

In joining NSE, it enabled Robert to develop his ideas in a manner that would not have been possible in his family business due to the small size of the company.

Reflecting on his well deserved retirement, Robert’s hobbies keep him busy with still a keen interest in steam locomotives and model railways.   Robert still has that passion and commitment in whatever he sets his heart to, and believes he is still no different to the person he was over the years dealing with developments of container spreaders.  Robert explains “I am very proud of all that has happened but fully realise that while I may have been the person that originally planted a handful of acorns that turned into a forest of oak trees, without the company and the dedicated team of people in the RAM family none of what has happened would have been possible”.

2015 – A new era in creating the worlds leading lifting accessories supplier
In May 2015, NSL’s RAM spreaders business merged with the grab business of Salzgitter Maschinenbau AG (one of the world’s leading cargo grab manufacturers and the leading shipboard crane grab builder) under a joint venture arrangement through PEINER SMAG Lifting Technologies GmbH.

This new era for RAM Spreaders the creation of the SMAG Group of companies opens up new opportunities in providing an extensive range of lifting equipment between crane and load for the container handling industry, bulk handling industry, recycling plants and more.